About a year ago, I learned of a wonderful Facebook group: Helping our Northern Neighbours. It took me a year before I took what I learned from that group into action and sent out a care package out to a family in Northern Canada. I wanted to share my experiences, and hopefully, open you up to the idea of donating a package!

If you live in the southern provinces in Canada, it’s a little hard wrapping your mind around what it’s like to live in the north. Now and then, I sometimes share their cost of living to people around me as a fun fact, though in reality, it’s not at all fun. See for yourself:

This Christmas, I decided to get matched up with a family to help them out during Christmas. Helping our Northern Neighbours have options when it comes to matching you up with someone. You can either do a one-time box, or do a yearly commitment where I think you send up 4 boxes a year. They can also match you up with smaller families if you’re unable to send up too much. I actually requested a family of 2-3 just because I wasn’t sure if I’d be able to send enough for a bigger family. I didn’t want someone’s names to be moved to the end of the queue again, but not get enough. 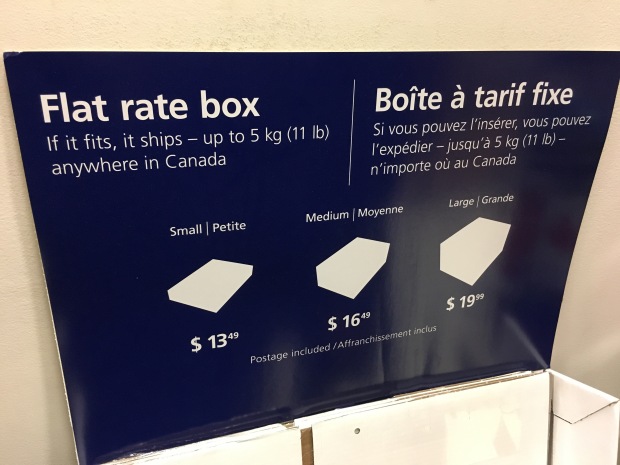 These boxes aren’t available everywhere, and even in BC, there’s only certain post offices that carry them. I realize that since we’re lucky enough to have them here, I should make use of this opportunity.

Here’s a disclaimer to all this: we all know that this isn’t solving anything. It’s not a permanent solution to help out those in the north. You can’t fix this problem through just donating food. But you know what? Till something better comes along, I like to think of it as being able to get some food into hungry stomachs. 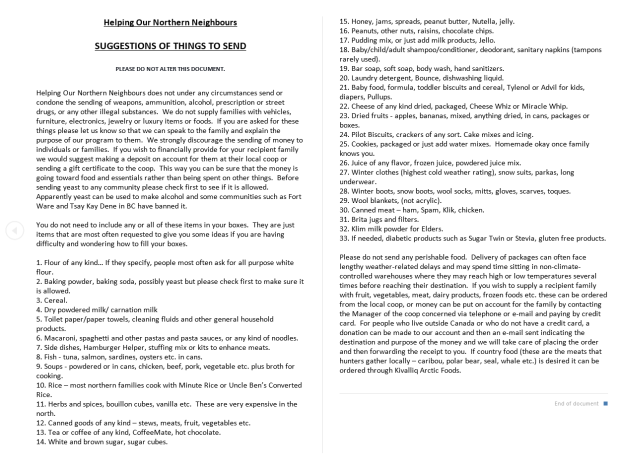 On the Facebook page, they have a list of common items that people need. They range from things like minute rice (it’s much preferred since it takes less water and heat to cook), to milk powder for their elders.

I actually got my mom to do this with me, and we each decided to pitch in one flat-rate shipping box worth of stuff. We went to No Frills and did our best to provide a variety of what was on the recommended list. We ended up getting about $120 worth of food. I can’t imagine how much it would’ve costed up north.

Some things to note is that we actually put some of the soup mixes (from different boxes) all into one box so that it takes up less space. We also found some Kool-Aid and other flavored water droppers, which takes up way less room than drink crystals. The No Name brand foods may not be the prettiest, but they actually have the most compact packaging most of the time compared to other brands. We ended up not being able to grab too many household supplies and sent mostly food.

Our two boxes were basically filled to the brim when we sent them off.

We ended up buying a few more items at the London Drugs where they sell these boxes just to fill it up. There is a max weight that you’re allowed, but I hear they’re pretty lenient. Ours didn’t end up going over despite it being full (or maybe it did but they didn’t tell us), so I wouldn’t worry too much about the weight.

Our packages didn’t end up making it in time for Christmas, but it got to our matched family in the first week of January.

It was a good bonding experience for my mom and I as we tried to figure out what to buy another family and how we’d be able to maximize our budget to take care of them. I’d suggest even doing it with a friend or two and splitting a family between you guys! Especially if you’ve got access to Canada Post’s flat-rate boxes 🙂

6 thoughts on “Helping our Northern Neighbours”