October is just the beginning of amazing months to come. I LOVE Halloween and pumpkin season in general.

Oddly enough though, I don’t mean pumpkin food and drinks. I don’t really love pumpkin spice lattes, no matter how much Starbucks tries to convince me that I do, and I require a lot of whipped cream on my pumpkin pies before I can eat it.

I went to the Richmond Country Farms’ Pumpkin patch to arm myself with fresh pumpkins! 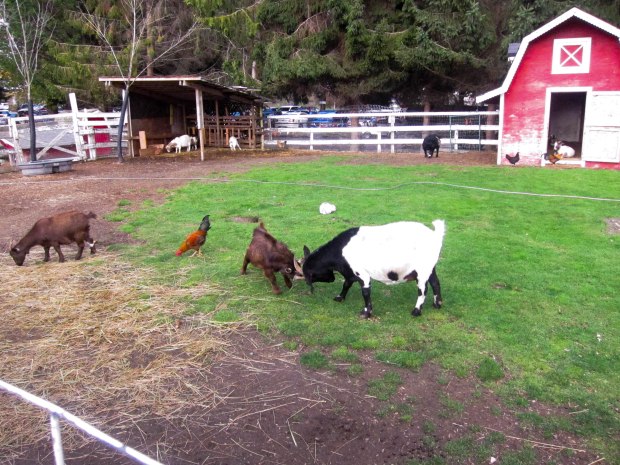 Last year I went to Southlands Heritage Farm and they were small and quaint. This year, I wanted to revisit Richmond Country Farms since I used to go there in elementary school. I still remember when I asked my “big buddy” (the older kids they pair younger kids with at school so that they’ll be supervised) to carry a huge pumpkin back to the bus for me. I’m pretty sure my big buddy hated me.

We ate before we came to the farms, but there were food trucks parked inside offering fries, fish and chips, and mini donuts. There were also slightly menancing statues of vegetables everywhere.

Each ticket ($12/adult) comes with a wagon ride, a pumpkin of your choice, and an apple. You have to take the wagon to the pumpkin patch, since it’s a little ways away from the main entrance of the farm. They had wagons going pretty frequently, so you’ll never have to wait for more than 5 or so minutes. I loved that they had someone on each wagon playing a guitar/banjo and singing tunes! They try to get the crowd to join in and it felt pretty festive. Along the ride, there was also a haunted house and motion-activated pop-up scares that made the kids on the wagon scream.

I was hoping I wouldn’t get too muddy, but I guess these things always turn out worse than you’d expect. I had on rainboots that went mid-calves, so I was okay for the most part. My boyfriend wore regular shoes since he didn’t have a pair of boots at my house. His shoes basically disappeared into mud at the end of the day. It was also fun watching other people who didn’t have proper shoes make their way through the muddy pumpkin patch. You can see them mapping out the best route that would dirty their shoes the least, but then when they start trudging, you see the defeat flash across their face as they realize their fight is futile.

I picked up three pumpkins and I’m excited to get to carve them! Though last year I bought four pumpkins and ended up carving only one. I guess we’ll see!

On the way back, our wagon was blessed with the fact that a muddy pup led it! I saw him earlier when I was going to the patch, but he didn’t lead our wagon. I was just so happy to be bestowed this honor. Muddy pup, guide away! He’s so smart too. When there’s a fork in the road, he knows which one to lead us down, and he also knows when to stop for traffic. Pups are amazing.

Can’t wait for the upcoming months for more festivities!