Last week I went to a showing of The Zombie Syndrome: Dead in the Water. This is my second time joining the Virtual Stage during their Halloween interactive theater experience, and it was just as fun as the first time!

One thing to note is that each year, they have a different story. The stories are linked in a small way— the zombies are always there, but they usually mutate from year to year. We’re not really allowed photos during the showing, since it’ll give away the game and plot, but I did sneak in a few. Though they’re all really random looking at it without context!

The question I get most when I tell people this thing exists is simply: What is it?

The Zombie Syndrome is a yearly interactive play. The play doesn’t take part in a theater. Instead, it’s spread out over an area. The first year I played, we met in Gastown and the whole show revolved around us running around the area. This year it was on Granville Island!

There’s small signs around the area where the showing is taking place to warn the public. Probably so they don’t call the cops on us. One year, my friend’s team had to rescue a guy from the trunk of a car and there were very concerned people passing by who had no idea what was going on.

Along the way, actors will immerse you into the story. I think your role when you join these as an attendee is always going to be a government operative helping to contain a supernatural occurrence— at least that’s what it has been for me. One year we had to save the Russian prime minister’s daughter or something like that. Sadly, we didn’t solve all the puzzles and she died in the end.

This year’s story revolves around vampires. Who knew there’d be a cult of vampires in Vancouver?! 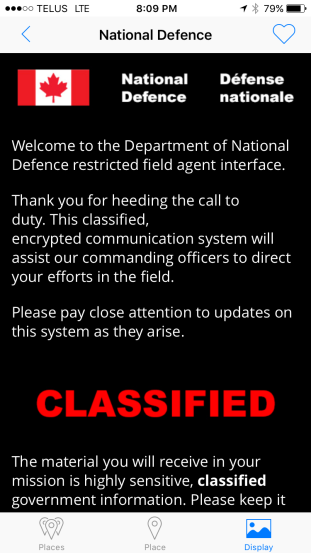 Expect jump scares, lots of chances to use your brain, and teamwork. They also usually integrate technology into their games, and both times I did it, it required at least one person on the team to have a cell phone. They ask you as you’re buying your tickets if you have a phone.

The Zombie Syndrome also make sure you’re involved in the show at some point, since you’re each given a role at the beginning of the game. Each group has 10+ people, and as there’s more than 10 roles, sometimes you’ll get more than one role. Your role will be called into action at some point during the game. This year I was the assassin and I was really scared that I’d have to do something that’d involve interacting with zombies. I recall there was a ninja role the last time I played and this one girl had to sneak into a cage full of zombies to retrieve something. I did NOT want to be that girl.

I always attend these shows not expecting to be scared, but when you get cornered by zombies, the fear becomes pretty real. I can always count on The Zombie Syndrome to activate my fight or flight response. And I can tell you my response has always been flight.

The tickets are actually really decent in pricing. On Tuesdays they’re $12.50. For the budget, acting, and fun involved, that’s dirt cheap. We went on a Wednesday this year and it was $25. I should warn you though that as it nears Halloween, ticket prices go up to the $40-$50 range, but honestly, even at that point, they’re worth it. The previous year they had rented out an apartment in downtown Vancouver, and this year they also had something pretty sweet. I don’t want to spoil anything else for those of you who might be going!

Excited for what’s in store next October! Tickets are still on sale for this year, so you better hurry and grab them quick!