I first heard about this about three years back, but I have always been too intimidated to actually go to comic book stores during the event. I had no idea how it would go. Was it awkward if I just took books and left? Do I just grab free books? How do I know which ones are free? Why are they free? *suspicious glare*

Well, now you can learn from my experience. It was positive, and one word of advice, go early. The earlier the better.

Why are stores giving away free comic books? The aim is to get comics back into the hands of the people. You get an issue to get you started, and hopefully you discover your love for comic books. For me, it mainly gave me new reading material to discover, allowing me to stray from the usual comics I would read. It’s also a great way to get people to visit their local comic book stores. Free Comic Book Day happens every year on the first Saturday of May. Make sure to check the official website to see which North American comic book stores are participating! Don’t show up at a random comic store expecting free comics.

For the actual free comics, let’s look at Golden Age as an example.

Lineup was out the door!

It loops around the store

The island of free comic books

The line up was out the door, and when you got in, you loop around the store. It’s nice in that you get to look at their merchandise and books as you lined up (great idea to get people to buy their stuff! I don’t blame them at all!). The whole line took about 40 minutes to get through. At the back, you get to an island of free comic books. Most of these have “Free Comic Book Day” printed on them by the publishing company, so you know they’re safe to take. If not, and the store has extra overstocked comics they don’t think they can sell, and they’re nice enough to give them away as well, it’ll be marked.

At Golden Age, they limit you to 4 comic books per person, and you should be taking different titles so there’s enough to go around. There was a huge selection. You grab your four, and then make your way to the front to get a bag for them.

Again, go early. My friend and I had a whole route mapped out for comics, but we eventually found that stores run out pretty fast. 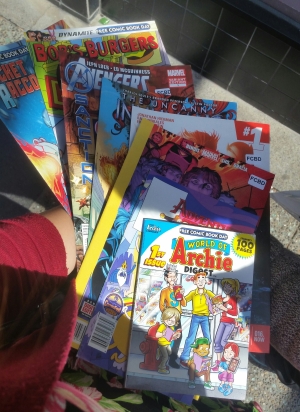