In our quest to try as many different kinds of foods I’ve missed out on during the last few years I was away from Hong Kong, we decided to go to Jordan to give Hello Kitty Chinese Cuisine a visit!

I’m not a huge Hello Kitty fan— I guess my relationship with her can best be described as tolerable. But I can’t deny that she’s kinda cute. And I now know she can look even cuter as dim sum!

The outside of the restaurant looked like a classy Chinese restaurant with a splash of Hello Kitty.

The décor was something I really appreciated. I’ve seen lots of themed cafes in Asia where they seemed to have thrown together a bunch of items of that theme and called it an establishment. But at Hello Kitty Chinese Cuisine, the sturdy wooden, Hello Kitty-engraved tables, intricate patterns on the walls, and classically inspired watercolors of Hello Kitty in traditional Asian attire was well thought out. It didn’t feel “cheap”, nor did it feel like it just existed simply as a gimmick. 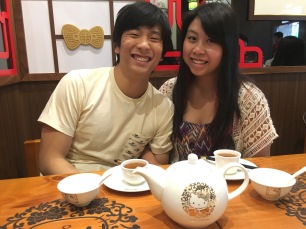 Even the plates and teapot had Hello Kitties on them, and later on, I realize the paper they put between the bamboo steamer and your food was also kitty shaped. Talk about detail!

If you make a trip down here, I must warn you on the price. Nothing here was cheap. I read an article before coming comparing the shrimp dumpling’s (har gow) price to that of the Peninsula Hotel in Hong Kong. The har gow was more expensive here than there, which is kind of ridiculous. My party got to the restaurant having eaten a bit because we didn’t want to have to order till we were full, but rather go there and order a few dishes just to admire the restaurant’s efforts.

We ordered the har gow, steamed buns with a sweet, melted egg yolk center, and Chinese sausages wrapped in steamed buns. We also ordered stir-fried noodles, which they tried to theme with shredded egg shaped into a bow. But it was the dim sum that really made the Hello Kitty theme stand out.

Look how cute they are! 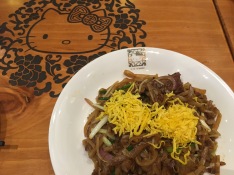 The taste was mediocre, verging on good. Maybe it was because we had eventually gotten hungry, but the things we ordered tasted pretty decent, which wasn’t what I had expected coming here.

I honestly will probably never go again since it’s too pricey for what you’re getting, though I do really appreciate the effort put into the dishes. Perhaps if I wanted to show a friend stopping by HK a cute restaurant, I’d revisit, but since I’m not a huge Hello Kitty fan I just can’t justify the price! I’m glad I tried it out though. J