I can’t believe another year is over. Now I’ll have to wait another 12 months until the next convention. 😦 But I suppose I should look at this as “So glad I got to come again this year!” And I am glad! This is my fourth year attending ECCC and it never gets old. Ever since I bought my tickets in September, I’ve been waiting for April.

The 3 days of the con were jam packed so I’ll do a quick summary before I forget!

My boyfriend and I woke up at 6AM so we could start our drive down to Seattle. The drive was alright, but it wasn’t until I got to downtown Seattle that the driving got hard. I hate driving downtown due to all the one-way streets. And a foreign street was even worse. This was the first year I personally drove down— other years I either bussed or hitched a ride with a friend.

We arrived at Seattle at around 10AM and after checking in to the Renaissance hotel, I took my giant prop to the convention to get it peace bonded (approved for the con) although I wasn’t cosplaying with it that day. The day before, I almost had a meltdown because on the ECCC Facebook group page, there was a lot of anger towards the organizers who were confiscating prop weapons. I wanted to make sure that on Day 2, my prop will be alright and if needed, I would’ve tried to make some last minute changes to make it appropriate. But honestly, I had spent about 4 months making my huge hammer, so I would’ve been heartbroken if it wasn’t allowed in.

Luckily, they approved it and I walked back to the hotel to put it aside. Then it was a walk back to the convention. Luckily, we only lived about 6 blocks away from the convention (though Seattle hills are no joke).

Just being back at the con was making me tear up. I’m not kidding. There’s a vibe about 2 blocks around the convention where you could see everyone in their costumes or geeky gear, proud to be repping their fandoms and the things they loved. I really had missed this!

At the Starbuckses(?) downtown they had special themed drinks to celebrate the con! You could choose between Batman or Superman. I got the Superman, and the boyfriend got Batman. I really quite liked the Superman, until the raspberry whipped cream melted into my frappe and made it all too sweet. My boyfriend said the Batman one was bitter and not tasty. So…guess I was glad I chose Superman?

Day 1 was filled with buying things. We knew that day 2 and 3 would be cosplay days, so today would be the best for carrying things. 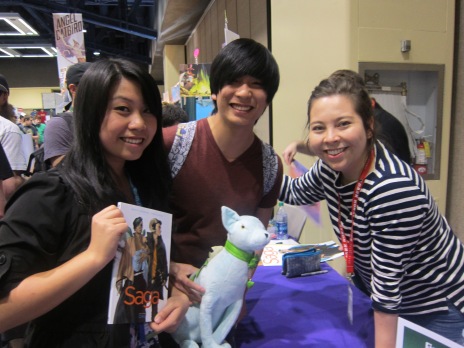 We got our Saga graphic novels signed, and we also got 2 commissions from Katie Cook. We wanted a mini sketch of our cosplays from last year, as well as one from this year. These are so cute!! 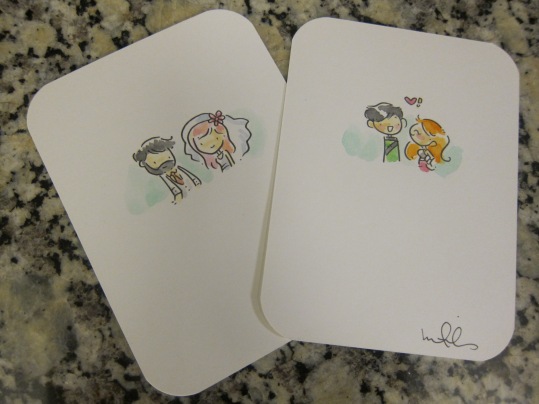 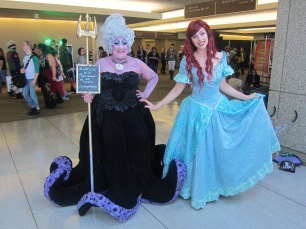 Dinner consisted of meeting up with the rest of our friends and then heading to an Italian place I had Googled up: Cafe Bengodi. The pasta was a little too chewy/substantial for me, and I wish I had gotten spaghetti instead, but it was still pretty good. I was starving after a day of walking around the convention centre. 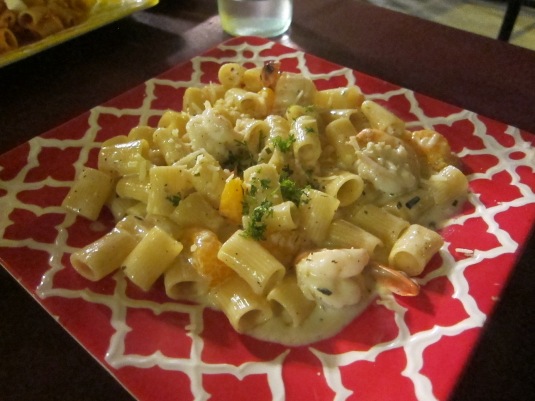 I knew Day 2 would be my most tiring day. I was going to be Nora Valkyrie, and that includes holding a hammer prop my size. Also I was going to be wearing heels. See, these ideas work so well in my head, and then when the con happens, I realize I’ll have to execute it and I hate past Karen. I guess past Karen just figured future Karen will have to deal with it. I hate her.

Anyway, my boyfriend dressed up as Lie Ren! As we walked around the convention looking for other characters from RWBY, we managed to congregate a small group! 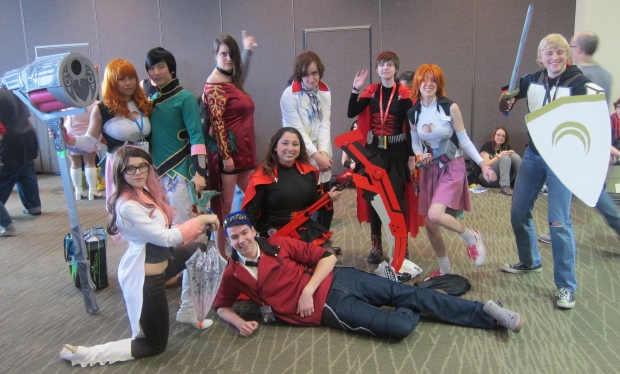 There was a lone Nora and a lone Lie Ren at the con as well. Group pic looks so colourful 🙂 Love these character’s colour schemes. 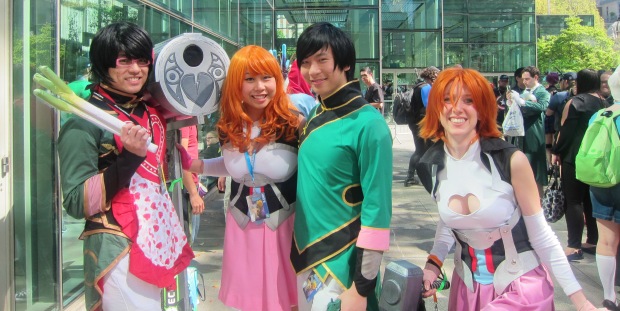 As much as I wanted to stay in Nora all day, I was dying. So at around 3PM, we went home to change, then came back to the con in casual clothes. We went to see the iZombie guests do their panel and did more shopping.

Funko’s booth had official Funko artists doing drawings for people! I asked for a Groot one to gift to my mom (she’s obsessed), and my boyfriend got one of Link.

We wanted to take some time to visit Pike Place’s public market, so we grabbed a grilled cheese at Beecher’s. I had missed lunch, so this sandwich was heaven.

Dinner was at the Cheesecake Factory across the convention centre. The wait was about 80 minutes, but we passed quite a bit of time by visiting the gaming section of the convention that was located at the Sheraton hotel. My friends ended up stocking up on their TCGs, and I bought Love Letters and some pretty dice for my tabletop games. 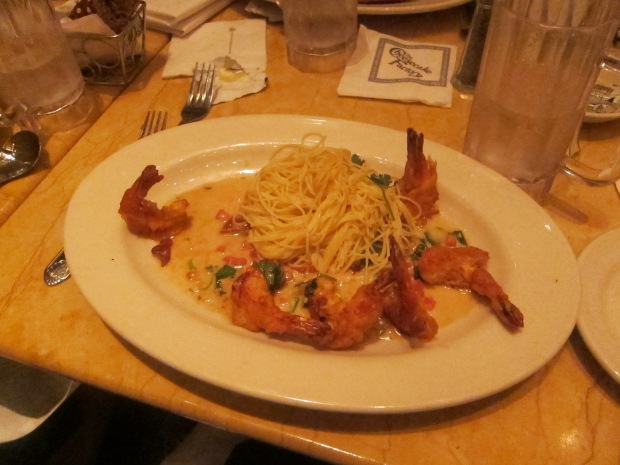 I felt my shrimp scampi with angel hair pasta was a little small. Man, I really needed carbs after these physically demanding days. We also got a slice of Dulce de Leche cheesecake to eat later in the hotel. Phew, I made it through my Nora cosplay day.

As I’m writing this, it’s the end of Day 3. Today was a lot easier. I cosplayed as Temmie from the Tem Shop and my boyfriend coplayed Bob. Easy to wear cosplays, especially compared to Day 2’s.

We had seen quite a few Undertale cosplays the two days before, but when it came to looking for people to take pictures with today, it was quite hard.

We did last minute shopping, and also went to a random panel with Lana Parilla. We ended up leaving the convention at around 4PM.

After a quick shower, we went to the Crab Pot for dinner. Crab was too expensive, but we got a seafood medley thing. Not quite as good the one in Vancouver, because the Vancouver one’s sauce was really good, but still a yummy dinner all the same! 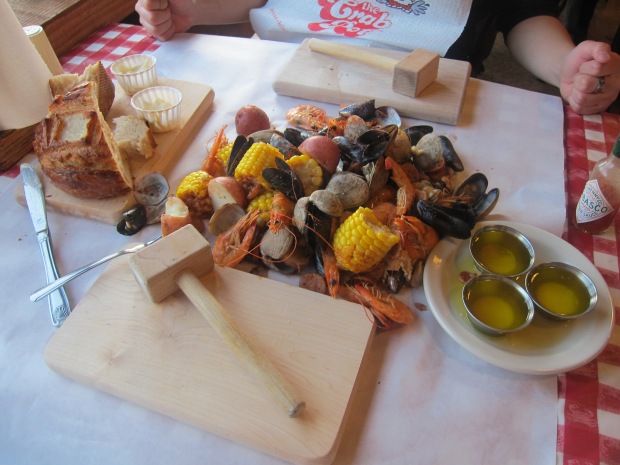 I can’t believe another year is over. I had a great time again, and there’s definitely lots of memories and souvenirs to take home. I guess at least I can look forward to next year!