So I’m at a decent position in terms of my new year’s resolution to read more books, and am on track with the reading challenge I’m currently doing. 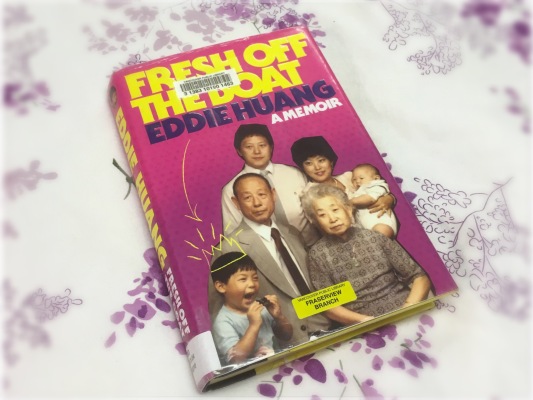 For January, I read Fresh Off the Boat (link to Goodreads page) by Eddie Huang. This checks off “A book I’ve been meaning to read.” As further proof that this is a book I’ve been meaning to read, the public library was actually insisting I return the book because I had extended the due date twice already. So after holding it for the last two months, I had to return it. I really did want to read it before I gave it back, so voila!

Fresh Off the Boat is really about Eddie’s journey as a Chinese growing up in America. In a way, it was easy for me to relate to him. There were initial parts in the first half of the book that made me tear up because I understood the pain he felt with the pressures of Asian parents. He also feels left out amongst his classmates, based on the food he eats, and his influences as a child. But as the book progress, Eddie’s life can only be described as a roller coaster.

At some point in the book, Eddie gets into a full on gang fight with some guys, one being from a private school. He then learns that the next day, a few of his friends had gone and “taken care” of the guy at the private school, basically putting that guy into the hospital. I had to double back and check how old they were at that age, and I think they were 14 or 15 years old. Geeze. Okay, that I cannot relate to.

A lot of the book is about Eddie struggling to find himself, and  he goes down a lot of different routes trying to do so. Some, arguably, wrong ones. I’m currently 22, and also trying to fit in in the world. A fresh post-secondary graduate, not quite sure what’s right for me.

I thoroughly enjoyed the book. I was first drawn in by the humour that Eddie is able to convey about being in an Asian household, and then later was engrossed with rooting him on. There are times when a certain part of the “story” seems out of place, and not quite adding to the general plot line. But hey, it’s his life, and I guess bits of it didn’t fit the big picture.

For those of you who don’t know, Eddie Huang is now known as a chef, and owner of Baohaus, a sandwich joint in New York that also sometimes features joints (he has on occasion hotboxed the restaurant, creating a flurry of smoke for all to see outside the establishment’s glass windows). He also is featured in various food shows, and is a comedian.

Below are two quotes that I really liked and decided to pull out from the book.

Eddie talks finding the essence of food, and why it’s important to him why he keeps his recipes traditional. And in the case of “Are Americans not allowed to cook Asian food then?”:

“Are you interested in this food because it’s a gimmick you can apply to French or New-American food to separate yourself from others? Or will you educate your customers on where that flavour came from? … The most infuriating thing is the idea that ethnic food isn’t already good enough because it goddamn is. We were fine before you came to visit and we’ll be fine after. If you like our food, great, but don’t come tell me you’re gonna clean it up, refine it, or elevate it because it’s not necessary or possible. We don’t need fucking missionaries to cleanse our palates.”

Eddie on growing up:

“Those years between twenty-four and twenty-seven, when you start to realize things don’t always break the way they’re supposed to, are sobering. When you’re eighteen, you’re hustlin’,  you got friends producing, DJ’ing, in bands, all the girls look like someone out of the movies, you figure everyone is gonna blow up like soda and water… But you hit twenty-four, half your friends are strung out, some are in jail, some got herpes, everyone got HPV twice, and you realize, yeah, we’re in a movie: Requiem for a Dream.”

I have watched the TV show prior to reading the book, and while the TV show is reminiscent of Eddie, the book is a lot more serious and…dark? Violent? I don’t quite know the correct term. But I do love the TV show, and the book was quite good.

Hopefully I keep up with this reading thing and manage to get a book done for next month!

3 thoughts on “Fresh Off the Boat – Reading Challenge (January)”