I started saturday with the Whitecaps game against Real Salt Lake yesterday! It was great being back in BC Place to cheer on our team— it was my first game of the season in which I actually went to the stadium. The other games, I had watched on TV. I really missed the atmosphere and it was definitely a lot more nail-biting watching it live!

Afterwards for dinner, we decided we’d go to the night market. I refused to pay another $2.75 to go to the Richmond Night Market near Bridgeport so we went to the International Summer Night Market. It wasn’t a big hassle, especially as my friend W. drove. How does it rate compared to the Bridgeport one?

We got one. Light and refreshing! Slightly bitter from peel.

There was definitely less people in general, which also probably led to there being less stalls— both eating ones and shopping ones. However, the lines are a lot shorter, and you get food faster. There is a smaller range in the variety of food: for example, the Bridgeport one had feverish stalls (more?) that sold solely beverages. In the Summer Night Market, there was more like two? One and a half. They only had one stall that specialized in bubble tea. They did have three that made hurricane potatoes though.

In general, prices were slightly cheaper, especially if you took the time to look around. My boyfriend and I each had a plate of Takoyaki. It was $3 for 4 pieces. There was another stall that sold it for $5 for 6 pieces or something (and that stall had more variety. You could have something other than just octopus), but we just wanted to fulfill our takoyaki cravings. At the Bridgeport one, the cheapest takoyakis we could find were about $5.50 for 6 pieces. Drinks in general were also cheaper, and honestly, I’d say you’d be saving if you ate at the Summer Night Market. You just have to be willing to sacrifice a bit of choice. 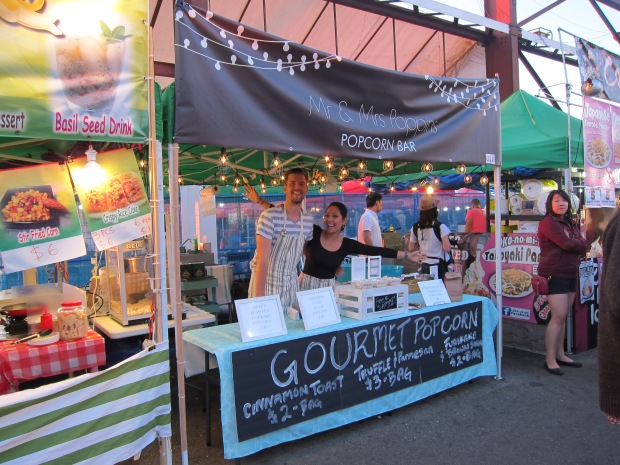 A quick sec to give a shoutout to Mr and Mrs Poppins! Such a cute couple, and we bought a bag of their seaweed furikake popcorn and walked around munching on it for the rest of the night. $2! And very interesting flavours. I’d highly suggest you go by since they have samples of their flavours for you to try! 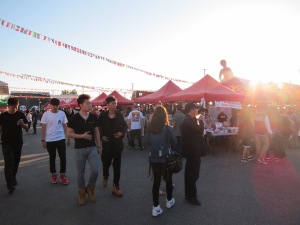 The stalls were honestly not very interesting. But then again, I don’t love the stalls at the Bridgeport one either. If you wanted your cell phone cases, socks, and jewellery stalls, the Summer one also has them. Just less. But they’ve got less quirky stalls, making it a little less entertaining. 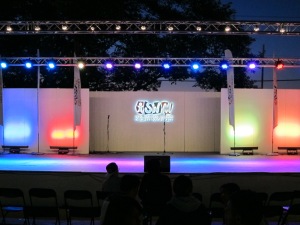 We ended up eating our food while watching people perform on stage. And then there was a competition for the people in the crowd to go up and do a series of challenges. One of our friends went up and automatically got free Krispy Kreme donuts! Anyhow, I still think the Summer Night Market is a great place to spend a night and just have street food and look at stalls. You’ll probably be done making a lap around it faster than the Bridgeport one, but hey, it’s free entry! Plus, less crowded 🙂