I built my own PC! It took about a year of planning and gathering parts, but it’s finally done!

A lot of the rush came from looking around for deals on the parts that I wanted. I would first compare parts and then when I decided on something, I’d be on the lookout for when it goes for cheap (or just cheaper is fine). The process took quite a while. I bought my SSD almost half a year ago and it was the first piece of my new PC that I got. Then came my CPU about 2-3 months later. As you could see, I was in no rush….

That was until last week when I went to pick up my RAM from NCIX(8GB for $58!!). I was only missing my motherboard, power supply, and case at this point and my boyfriend convinced me on a power supply, and we ran to get the case I had wanted at Lansdowne Mall (they had 1 left). On the 10th of January, I finished buying my parts and started building the PC.

Luckily, my boyfriend built his own computer so he gave me plenty of pointers. Mainly, it was a lot of watching this video and following along:

All the steps are broken down, and of course, just skip the steps that don’t apply to you. I’m not going to lie and say I loved the process, and there were quite a few times when I had to undo all the hard work I had just done leading to much frustration (I think I said “Kill me” at least ten times during the process). I was also sure that a part would not work and I would have to send it in for repairs. But miraculously, we finished building it that night. At around 1AM, I finished downloading League of Legends and I played my first game on my PC! The whole process took around four hours? That included installing the OS and such.

Wish it would assemble itself

The whole thing felt very rewarding, and it feels nice knowing I paid for the whole thing. Makes my summer job seem less of a chore when I see the rewards!

And I bought two LED monitors so now I have a dual screen setup! 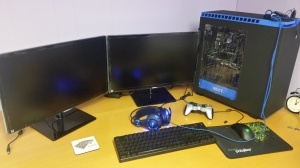 A cellphone pic of my setup, thus the quality

If you’re looking for parts, I’d suggest giving it time so you don’t overpay. Look out for deals. Everything goes on sale at one point or another. The only thing I bought full price on my list was my case because I wouldn’t settle for anything else and it was a limited edition case sold at one place. They probably won’t be putting it on sale in the near future. Also, if you find a cheap Canadian retailer price, just go to Memoryexpress or NCIX to price match! That’s what I did for quite a few of these parts!

6 thoughts on “Play all the games!”