Caught in between classes and the many papers, projects and presentations that has lined my agenda. However, that makes this game I recently got perfect in terms of how I’m slowly going insane.

Alice: Madness Returns is the sequel to American McGee’s Alice. The premise of the story revolves around Alice having witnessed her family being killed in a  tragic fire. Having to face what she saw, and being the sole survivor, she is filled with the horrors that haunt her every day. In response, she escapes to a place she calls Wonderland, leading others in the real world to believe her mad. This game begins in 1875 and Alice is now 19. She has been released from the mental asylum, and is placed in an orphanage in Victorian London where Doctor Bumby watches over her. She’s getting better, but at the beginning of the game, she is sent to run an errand that accidentally leads her into Wonderland again, causing her to spiral down into her madness once again.

Now if you’re used to Disney’s version of Alice in Wonderland, you’ll be pleasantly (maybe) surprised. The beginning of the game is absolutely stunning. 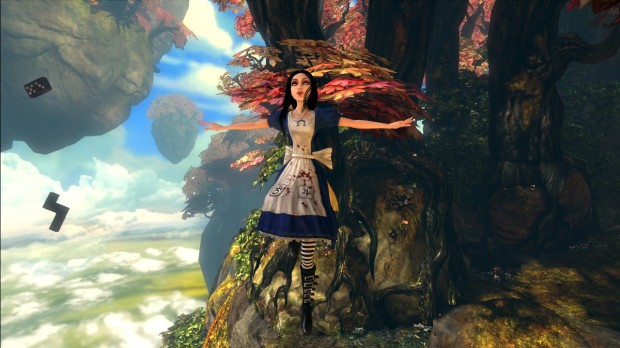 The first screen cap I took in game. Couldn’t help myself— it was ridiculously beautiful.

This is not at all to say that the rest of the game is not stunning. I have to say that one of the main things that sold this game for me was how nice the graphics were. You’re moved from the natural beauty that is Wonderland before it starts to crumble in Alice’s mind, to a Steampunk-esque version of the Mad Hatter’s place. There is more (I’m only through the first chapter of the game…actually I’m stuck there, but I’ll explain why a little later on) as the game progresses, and people have hinted to me that it gets more disturbing. 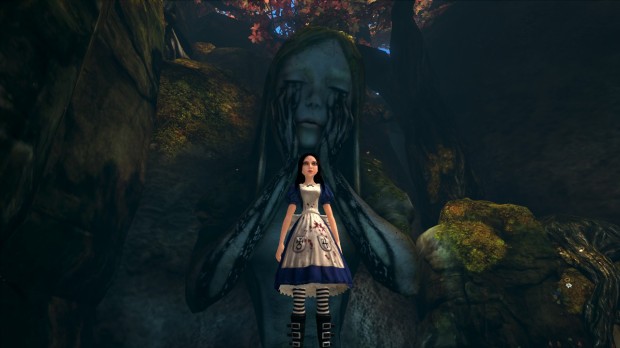 Oh look. It’s a statue of me crying.

Screencap borrowed from (x) since I have not yet gotten here yet.

What stood out to me was that at the very beginning of the game you already feel a sense of unease. There are no jump scares in this game (at least not yet for me), but as you wander through the orphanage, you can’t help but be a bit nervous for what to expect at every turn that you make. Psychological horror is awesome.

Now on to what I did not like about this game: it’s buggy. I am currently stuck in the last part of the first chapter because I cannot get my freaking umbrella open to act as a shield. It turns out that I will have to go through my configuration files in my computer to fix this. I also had issues with getting the mouse that pops up when you open the options screen to go away. I ended up with three cursors on my screen as I played the game. I had to restart the whole thing in order to make it disappear. Since this game is about three years old, I’m sure there won’t be any updates to deal with these issues, so if you do get this game, know that this is what you’re getting yourself into. It’s not horribly hard to fix, but it does mess with your game experience since you will have to exit the game in order to fix what is wrong.

Additionally, if you’re very into fighting (I guess I like it, but I understand that not every single game has to be focused on solely that), Alice is quite limited in those terms. The Vorpal blade that she uses is her main attack, and her swinging it is quite straightforward. You press your left moue button. There are a few more side weapons, such a pepper grinder that can be used as a ranged gun, and bombs, but they’re not as prominent.

Overall, I’m pretty excited to squeeze some more time out of studying and invest it into Alice: Madness Returns!