So I haven’t seen movies for a while because school has been swamping me down, but I did manage to catch Thor : The Dark World with one of my friends over the weekend!

When purchasing our tickets, we realized that aside from the usual IMAX, Ultra AVX and regular showings (3D+regular), there was a new option available: D-BOX.

Doing some initial research, we found out that with D-BOX, your seat moves according to what is happening on the screen. We decided to try it out.

Firstly, if you choose D-BOX, you’re still watching a 3D version of the movie– at least that’s what happened to us. Secondly, we realized the D-BOX seats do not get a theatre to themselves like Ultra AVX films. Instead, we get an area of the regular 3D showing sectioned off for us. These seats are red in colour, and you pre-reserved your seats when you buy your ticket (much like the Ultra AVX films). They reserved some of the prime seats in the house for D-BOX viewers (middle section, closer to the back). When you find your seat, you’ll realize that on your right armrest, you get to select how intense you want your seat movement. These seats are also more comfortable and bigger (they fit less of these seats in the typical row than the regular seats). 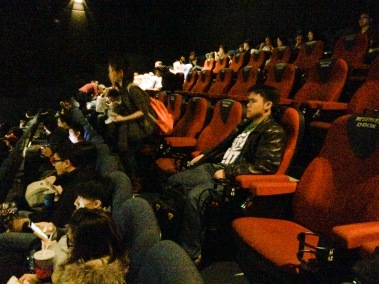 Now for the experience bit.
Firstly, if you get nauseous during 3D movies, I’m pretty sure you won’t be enjoying this. Back when I first started watching movies in 3D, I’d get dizzy, and the same thing happened initially with D-BOX. However, my nausea went away after I got used to the moving seat.

The chair doesn’t only vibrate, but it also lifts you up and down, and forwards and backwards. Now, don’t worry about it just throwing you around. These movements aren’t that intense, but are usually gentle. It’s not like those 4-D rides that make you feel as if you’re actually in a spaceship or whatnot– remember, you’re still in a regular theatre where 80% of the viewers there are watching the film in standard 3D. It’s also pretty quiet, so you don’t really notice the sounds from the chair.

During Thor, we would move along to spaceships that flew across the screen, which was cool. There was also this liquid matter that the screen showed, and our seats gently mimicked the liquid’s floating movement, making you feel as if you were a part of it. There were also scenes where when Thor jumped off a building (not a spoiler, because he can jump anywhere. He’s the God of thunder.), your chair raises you slightly so that you can fall with him off the ledge.

So what did I like about it?
I thought that it was a cool experience. It’s definitely differed from traditional methods of viewing movies, and it does add to the movie. You also don’t need to sacrifice the 3D (if that’s your thing– I like 3D only if it’s made well and the film was actually developed with 3D in mind). Having reserved seating meant that you did not have grab a seat early, and the seats were nice and comfortable since they were bigger.

What did I not like about it?
I was a bit nauseous at the beginning, but that eventually went away. There were some unnecessary movements (did we really need vibrations when Thor ran up the stairs? Arguably not.). It also costs more than your regular ticket (made a chart for your reference– Oo! Look at me being all fancy!).

My friend who went with me also thought it was a good experience. If you’re not sure whether D-BOX is for you, it never hurts to try it. For me, the biggest issue is the cost. I wouldn’t mind having the accompanying chair-guided-movements to movies if it wasn’t for how much more it costs per showing. I guess I would’ve also enjoyed it more if everyone in the theatre had D-BOX seats, but that wasn’t too big of a problem.

For those of you who have tried out D-BOX, what are your thoughts?