One thing that constantly confused me in Paris were all the signs. They have a billion signs all pointing to the same place, but suddenly, your end destination disappears. This happened to me on the streets, in the metro stations, and constantly at the Louvre.

Otherwise, Paris is a beautiful city. I was lucky to be sent to Paris for a business trip earlier in April for an eSports event we were hosting. But obviously, it being a business trip meant that there was limited free time. So really, my coworker and I did everything we could in Paris over one Sunday.

Having left Montreal while the temperature was in the negatives (plus wind chill), arriving to Paris to 20 degrees weather was crazy. I also ended up overpacking sweaters and stuff, but I did have some lighter summer wear too. The Sunday during which we had the whole day to ourselves, the sky was blue and the sun was shining brightly for the most part! It did start to get cloudy by the end of the day, but at that point, I was really glad for some respite from the sun. So what can one do in Paris for a day?

The plan was actually for us to go to the Eiffel Tower at night, since we heard it’s nicer looking out at night. However, I knew that I did want to see the tower in the morning too. So we did a quick stop on the hop-on hop-off bus (our company provided us with free tickets to do some sightseeing) at the Eiffel Tower!

So the wonderful thing about the hop-on hop-off busses is that it’ll take you everywhere that a tourist likely will want to go. For us, we didn’t want to make a stop at the Arc de Triomphe, but we did want to see it nonetheless. You can go up all the way to the top and look down (for an admission fee)! I had no idea people could go on top so when I saw ant-sized people up there, I was very confused.

Oh man. Given how we had one day to do the bulk of our sightseeing, the Louvre really made that a challenge. One can easily spend an entire day there! At one point, we had to cut ourselves off and move on after having spent 3+ hours there.

I did get to see the Mona Lisa in real life though, so that was really cool. I’ve always been told how small it is in person, so when I actually got there, I imagined her to be smaller. Either way, don’t expect to get too close because she is roped off! And there’s always a small crowd waiting to take a selfie near her! 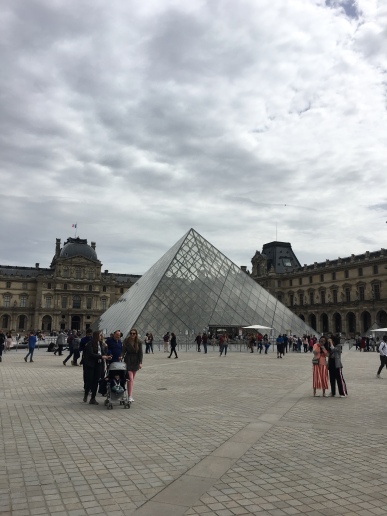 I’ve been to quite a few touristy churches before. But man, the Notre-Dame is HUGE! Firstly, there was a service going on as we visited, so the choir was singing. The organ and the choir’s voices echoed off the walls and it was amazing. I actually didn’t think they were singing live at first and that there must’ve been a sound system set up all around the church.

You can feel free to walk through the sides of the church and give it a tour — there are candles you can light with a small donation. Just be mindful that you are in a place of worship, so keep talking to a minimum and don’t disturb those who are visiting the church for prayer. Afterward, it’s definitely worth taking some time to admire the architecture from the outside! There are lots of intricate statues and my coworker was telling me how there are spires to the back of the church that makes it look like a ribcage!

In 2010, the city of Paris removed all the love locks couples placed on Pont des Arts since it was causing the bridge to sag. But as we walked across the bridge, you could still see street vendors selling locks on benches and interested couples all around!

When the government started removing love locks from this famous bridge and installed plexiglass panels to stop people, people adapted I suppose 😊 Even as we walked down the bridge, vendors continued to sell locks for couples passing by. This is gonna be a hard ongoing fight between the authorities in Paris and lovers from everywhere. #latepost . . #paris #france #lovelocks #travel #romance #europe #throwback

You may not be able to find a lock-laden bridge anymore, but you can see how hard people try despite the warnings and measures the government has set up (they’ve installed plexiglass on the bridge’s railings so it’s impossible to hook locks onto them). Love finds a way.

For dinner, we decided to choose a random restaurant in the latin quarter! The whole place felt like a tourist trap, but we didn’t mind. It had been a long day, and the streets filled with tiny restaurants looked very inviting. I think this is how fairytales where people end up being eaten by wolves start. 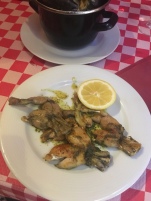 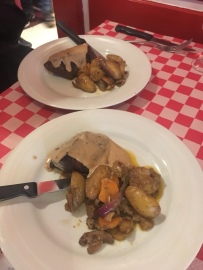 That aside, there are endless restaurants with set menus. For a certain price, you’d get a starter, a main course, and a dessert! If you wanted a no frills way to get frog legs and escargot, you’ll find it here. But of course, I don’t think you can exactly write home saying you’ve had authentic French fair either. I was happy with my steak and mussels, and I also tried some frog legs! A crème brûlée to finish and I was satisfied to boot. But then we still went and got a rose-shaped ice cream :’D

I ended up leaving France without having had a real croissant. But I did insist on having a crepe! I suppose this is cheating since we technically did this another day rather than in the same day as when we did all our other tourist activities, but I do think that if we tried, we could’ve fit it into one day.

We went to this place called Le Crépuscule for buckwheat crepes! The restaurant’s owner was kind and accommodating. The place is small though, so be ready to be pretty close to the table next to you! It was a highly rated crepe place, and I quite liked my crepe 🙂 I also ordered an apple cider with it and I’d definitely go again!

When I first started drafting this blog post, I had been back in Montreal for a week since my Europe trip. It’s now June. Time flies a little too quickly for my liking these days and I miss being able to blog consistently. But despite work being a little crazy, they also give me opportunities to go abroad to broaden my horizons! Hopefully, I’ll be able to put out a blog post for my time in Romania soon!