It was a Saturday when I drank my own face. Bright and early in the afternoon I went to Causeway Bay and came across the Selfie Café.

These cafes have existed in Asia for a while now. When I had first heard about them, they were in Taiwan and there, they’d take a picture of you then transfer it onto your latte. It took me a few minutes to figure out how to get this process done at the Selfie Café, but it was actually pretty simple.

You had a selection of drinks that could contain a selfie. There was also a bigger portion of the menu that had teas and coffee which couldn’t hold selfies. I selected one of the selfie drinks (each drink averaged $59HKD) and I was instructed to download the Selfie Café app on my phone. They provided wifi for anyone who needed it.

It took me a while to take a picture I was satisfied with, but I was really happy that I was given the opportunity to use my own phone and take as many photos needed. I would’ve been less happy if they snapped a picture of me on my behalf, even if that would’ve been an easier workflow for them.

I sent my photo via the app along with my receipt number and in about 15 minutes, I got a drink with my face on it. 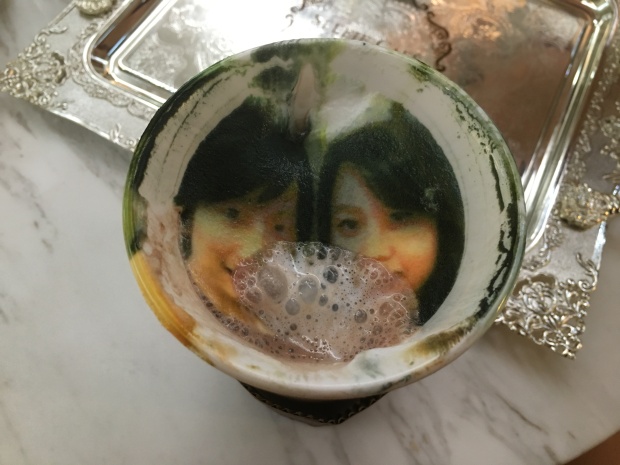 It’s strange drinking your own face. I thought nothing of it till I started to scoop out my face to eat the thick cream. It felt oddly disconcerting to see my distorted face subsequently putting my face into my mouth.

I would suggest getting a drink that’s not too sweet, because the layer of cream that they print your picture on is super sweet. Think thick whipped cream and about 3 centimeters of that.

The photo actually stained my lip a little, but I think it was because I didn’t notice it and left it on a little long. For $59, it’s not too bad given how specialized this is! The taste? I love whipped cream, so I quite enjoyed the photo. But after a while, it did get a little bit much and I had to sip on my boyfriend’s tea to get rid of the sweetness.

Now go out there and drink your own face.

4 thoughts on “I drank my own face @ The Selfie Cafe”