There was a sale on Borderlands: The Pre-Sequel! so my boyfriend and I got it! We had both played Borderlands 2 on solo campaigns so it was refreshing to play co-op!

Honestly, the game is new, but it didn’t feel new. It felt as if I was merely continuing my adventures from the previous games but just in space. They could’ve done a lot more with the space environments. They integrate the need for oxygen to be refilled, as well as the ability to prolong your jumps with oxygen. You’re driving moon buggies, the things you loot sometimes fly off due to low gravity, but otherwise, everything feels exactly the same. 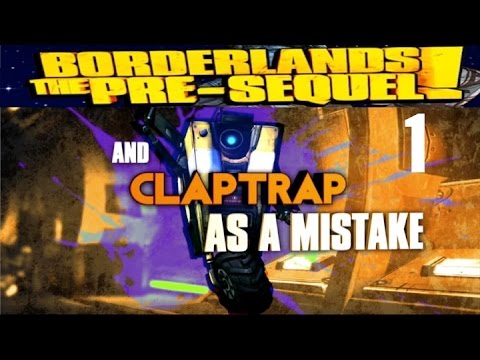 I played as Claptrap, and my boyfriend played Nisha. Claptrap’s special is volatile and completely random. It’s hilarious when you press “f” in hopes you’ll get one of the many random special attacks that Claptrap possesses, only to summon one that ends up killing your whole team. I enjoyed playing Claptrap because he was very funny, and humor is such a big part of Borderlands. One tip though: if you wanted to see Claptrap’s crazy antics, don’t play as him, but have your friend play him. I never get to see my silly outfits, or the comical things I do because it’s first person view.

That being said, the NPCs were lacklustre compared to the ones I encountered on Borderlands 2. Remember Tiny Tina? Ellie, Moxxie’s daughter? Sir Hammerlock? I do. The old characters are still very vivid to me. Who’s in the pre-sequel? No one’s particularly memorable. My favourite character probably was Felicity, who’s badass and smart. But (spoiler so just skip the rest of this paragraph to avoid it) in order to fulfill Jack’s request, you end up having to kill her.

I also didn’t appreciate the co-op aspect where loot is shared, so when we find a gun, we had to figure out who should get the snazzy super-strong pistol while the other has to hope for something else to come along. There also isn’t a greed/need/roll system, so you kind of just talk it out. This was most likely the same for Borderlands 2, but like I said, this was the first time I’ve used their co-op system.

I think $30 for this game was a fair price, but there were more bugs in it then I expected (e.g. when you get frozen by an enemy, you sometimes get stuck walking really slow. You can stop a quest midway at times, but it completely messes you over and you have to restart several times so that certain doors will open to proceed in the game). If this is the first time you’re starting the Borderlands franchise, please don’t start with the pre-sequel. Go do the first or second game, then treat this one as a supplement to it. It’s a decent game, but not worth $60. Honestly, looking back, $30 is probably the max I would pay for it.