Have you guys been to the River District near SW Marine Drive? It is pretty easy to get to, as long as you hop on the 100, which takes you down SW Marine Drive.

I went for the second time today, but the first time I was there, it was at night and nowhere near as pretty as today. Today was very hot, reaching 27 degrees in Burnaby where we were. But it made for a nice day to go out for a stroll, and enjoy the parks around there.

I went to Romer’s Burger Bar for the first time, and their burgers were very delicious. They also had a wide selection, with the best sauces. These burgers came a-la-carte, but they had fries that you could order for the entire table to share. We did this, and also got their featured drink, which was a Mango Mint Iced Tea. Having a cool drink on such a hot day felt amazing.

The Halibut Burger at Romer’s

After lunch, we walked along the river. There was not a cloud in the sky and the green green grass around us made for a very picturesque scene. 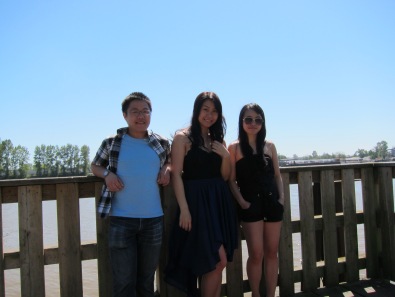 Doing some research, it turns out that during summer, the River District has a Farmer’s Market every Saturday! It would be interesting to check that out one day!

If you have been to this area, let me know what you thought of it! Or if you have any other recommendations!

9 thoughts on “River District in Vancouver”