I have not updated in a while…but between juggling Calculus schoolwork and trying to fit in time for my family and friends, I felt at a loss when it came to blogging! But believe me, I have wanted to blog several times after my adventures! So I hope this will allow me to summarize what happened in between these two weeks! Oh, and if you need ideas on what you can do around Vancouver during summer this year, feel free to try these out! Of course, some events are limited to the days they occur…

So to begin, on the 21st of July, Carmen and I went to Metrotown to watch Captain America! It was the advanced screening so we were both excited to be seeing it! Metrotown itself is not exactly a place I like visiting, with it’s busy customers and practically what seems like 50% of the population of Vancouver there during the holidays, but the movie itself made the trip totally worth it! The movie was amazing and I was going to blog about my feelings and probably a short review of it after the movie, but somehow, that post never got written. I even had the title made up: “And a bunch of Canadians shouted, “GO CAPTAIN AMERICA!” Did I mention special edition 3D glasses?! They are red and blue!

So here are the Cliffnotes version of my reflections on that night. Of course, Chris Evans was eye-candy galore! But he was also a good actor, portraying the weak but strong minded Steve Rogers and then the action-packed hero we know as Captain America. I also really liked the how the movie was not made to criticize the Germans, but focused more on the evils that Red Skull aimed to unleash. The audience was also wonderful, cheering together at the right moments. Many of us stayed behind, hoping to catch a glimpse of the preview of the next marvel film, but sadly, they did not show it for the advanced screening. We all complained, but that did nothing…so we all trickled out of the cinemas. There were fans in Captain America gear, which made you feel like you were part of a legit group of excited people! It was also funny how all of us Canadians were so excited Captain America, but then again, a hero is a hero. Thanks again Carmen for the tickets and spending the day with me!

Onto the next outing! If you live in Vancouver, you will know that the fireworks display during summer are a big deal to many of us Vancouverites. That is why around 300,000 people showed up to the first day of the Celebration of Lights! You needed to head out there early to get a good spot, but despite the heedings, our group had people there at around 5:30. Connie and Robert were the first ones there and then I arrived a bit later as I had to eat dinner with my family. Slowly, our group all managed to find the rest and we ate snacks and played Taboo as we sat and waited on the grass. I did not expect too much from the fireworks and was mainly there to spend time with my friends, but when the show went on, I was truly stunned. The Celebration of Lights was also a competition between countries to see who can put up the best display of fireworks and on the first day which we went, it was China’s turn to show off what they had to offer. I believe at some point during the dazzling lights, I said to someone “I feel like this is the closest I will get to magic.” The dark night sky was lit up in brilliant explosions of color. There were many different explosions and effects that the fireworks brought about, but my favourite were the ones that cascaded down like a curtain of stars.

After the show, there was the problem of getting home. No doubt, public transit would be congested so we decided to walk to Broadway. It was quite nice walking across the Burrard bridge at night and I eventually found myself on a bus and well on my way home! 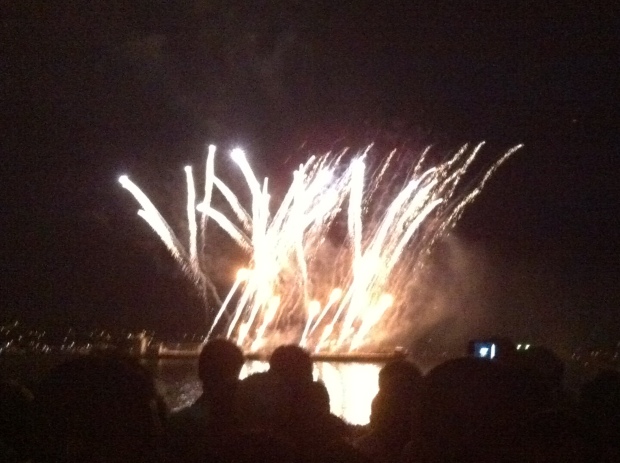 Then came hiking. Yesterday, Monica, Josh and I ventured to Lighthouse Park and Whytecliff Park in west Van! Lighthouse park was a series of many trails that you can choose to explore. I had no idea where I was going, but Josh seemed to know his way, and Monica seemed willing to take whatever road seemed most dangerous. And so we hiked. Hiking made me realize how out of shape I am, but asides from that, I have not felt that close to nature in a while. It was nice seeing all that green and it really felt like you were a part of nature while you got lost in the towering green giants of trees. Of course, I was scared of the spiders, bugs, wild animals and whatever else was kept in secrecy among the leaves and bushes. However, we made it out alive and then made our way to Whytecliff park. There was less walking and hiking involved at Whytecliff, but the view was equally gorgeous if not more. We just relaxed near the cliff’s edge, watching the sun slowly set and the waves gently roll by. I saw a seal amidst the waters and I quickly pointed it out to my friends, but it slipped away before they saw it. By the time we got back to Vancouver, it was quite late and we had to Yelp check what there was to eat. William joined us along the way and we eventually settled for Korean food. We were actually craving sushi, but after walking in to an all-you-can-eat place and being told it was $26 (price was sans tax and tip) per person, we booked it out of there. We were also wanting to try “Guu” or “Guu with Garlic” but somehow we went to Ma Dang Goul. The food was delicious, but we were so hungry you could have given us stale bread and we would have scarfed it down. 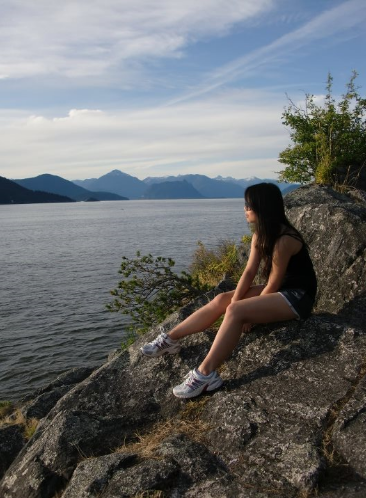 Asides from keeping up with things around Vancouver, I also started watching TV shows. I guess that is what a big chunk of my time is used for these days. I just roll in bed and watch them until I get tired. Not the best activity there is, but I am addicted. I finished Game of  Thrones (wonderful TV show by the way! Would not be surprised if I write something about it soon!) and then realizing I had nothing better to do, I started to watch Dexter. Both AMAZING shows and thus why I do not feel guilty wasting my life on them…well, not too guilty anyway.

Well, that is all for now! Hope your summer has been as fun as mine so far!

2 thoughts on “Meanwhile in Vancouver…”