I recently picked up The Final Station from a Humble Bundle sale. I had previously really liked the idea of having to take care of passengers on a train as I escorted them out of dangerous cities.  It turned out to not be as great as I thought.

Your game starts with an interesting scene that you get to walk through. You see a lot of people crowded around a man and their eyes all glow white. There are also glowing symbols on the walls of the church(?) you’re in. As you explore the rooms, you eventually walk into a tunnel leading you down to zombies and they overwhelm you. It cuts to black.

Okay, so what now? You jump to the present day (it’s unclear at this point whether the scene you just witnessed is from the future or if it was a dream) and you have to head off to work. You’re a train driver and you do delivery runs. The world around you is slowly changing and something big seems to be coming. Something bad. A virus is taking over people and turning them into mindless attacking zombies. The government is hiding secrets from the people during this time of impending doom.

During one of your train’s stops, the government meets with you and tasks you with carrying an important cargo. You’re not sure what it is, but they stress how important it is and you continue on. Along your stops, you’ll also encounter a myriad of people who end up boarding your train in hopes to get out of whatever situation they were in.

In terms of gameplay, there were two main aspects to it: keeping people on the train alive and fighting through towns in order to get a Blocker’s Code to proceed from station to station. 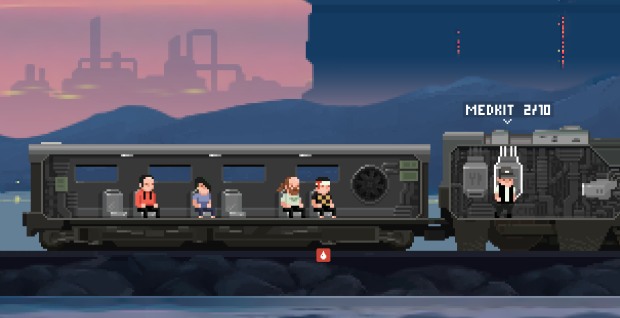 When passengers board your train, they’ll have several gauges to indicate their wellbeing. You have to make sure they’re fed and that they’re given med kits. You have a limited amount of these so you’ll have to manage your resources. Your train is also finicky and will require you to mess with different controls every now and then so that everything is running properly (i.e. keeping the air levels at a comfortable level for the passenger coach, and that the cargo isn’t overheating). Between taking care of the passengers, messing around with the train’s controls, and also receiving messages on my train’s messaging system, I literally had no time to listen to my passengers talk to one another. They actually reveal a lot of the story through their conversations so I wasn’t very happy with this.

When you reach towns, certain passengers may disembark when they’ve reached their station. If you successfully get them to their destination, they’ll give you some sort of monetary reward. In these towns, you usually will also have to fight off zombies as you proceed through them. Your train cannot continue on its way until you get a Blocker’s Code to unlock the train. Apparently, this was a security procedure that the country implemented so even though towns are riddled with zombies, you’ll still have to hunt for those codes in order to move on.

The fighting isn’t the most interesting. There are several varying enemies that attack differently, but even then, you’ve only got a handful of different attacks. It becomes pretty routine when fighting them. It only really gets hard when you’re swarmed with several of them. You also are able to find loot in these towns and I didn’t realize you could use what I thought was junk to craft med packs on my train.

In terms of story, the Final Station tries to create a mysterious world where there is a lot of importance hinging on your role as a train operator. Much of the story is slowly revealed to you through notes left behind by people and through the conversations I mentioned earlier. I’m pretty sure I read all the notes, but even then I was kind of confused throughout. The ending fell flat in being very stereotypical for a story that involves a hero and zombies, and personally, I found it disappointing.

I will say that I quite enjoyed the art in the game. As my train progressed through different terrains and countrysides, I found myself focusing a lot on the background.

The game itself costs $14.99. I really cannot recommend getting it at that price. The gameplay is repetitive and the story’s end just doesn’t live up to what the story was leading up to.

3 thoughts on “The Final Station: Doing your job during the apocalypse”