My friend and I were at Chapters one time, and we saw a poster that advertised a book signing. Dav Pilkey was coming to Metrotown for a book signing!

We both decided that we would have to go because Captain Underpants was such a big part of our childhood. I remember sitting at my friends house after school and all we would do is read all his Captain Underpants books. Back then, everything was so carefree and the world seemed so much easier. And the underwear wearing captain really was a hero to us. Plus, toilet and school humour was always well appreciated.

Anyone remember the Flip-o-Ramas!? Every book should have a Flip-o-Rama. Man, those things were like magic.

At Chapters, the line up was not too bad, but there was a decent line. The Chapters staff served us salted caramel and cookies, making the line up more fun!

From left to right: Dav, my friend’s sister, my friend, and me

My friend and I were giggling so much before we went to the little platform thing because we were getting nervous. We thanked him profusely, and what was amazing about his signing was that he did not just sign his name– he also drew you a picture too. He drew Captain Underpants for my friend David’s book (he could not make it, so he told me to get him one), and for mine, I requested Super Diaper Baby for mine because he was so cute and I have always loved him! 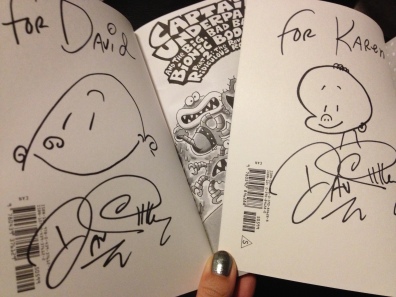 So thanks again Dav for making our childhood what it was!

March 27, 2013September 6, 20153 Comments
I felt the need to just ramble about how I felt after reading Sandman. And here are my unfiltered thoughts (though I edited for grammar)– just thought I would share it with you guys! You may notice it is a bit different from my usual style of writing, but that is because I was just pouring out everything that went through my mind after reading the volume!
—————————————————————–
I have nothing better to do on this fine Tuesday afternoon. I have braved through all my classes, and am now waiting for my HR meeting.
Anyway, I was at the gym earlier (shocker!) and instead of bringing my usual iPad to watch an episode of Supernatural while I run, I read volume 3 of Sandman. The stories were okay. Like the first book, I found myself loving certain parts of the book a lot more than the rest. I remember for book 1, it was when we were introduced to the Sandman’s sister– Death. She is amazing. Dare I say perfect? We see her again in one of the short stories in this volume.

I still don’t entirely get Sandman. But I respect Neil Gaiman as a writer– a lot. He has that dark vibe to him, much like how you would expect Tim Burton to write if you got a chance to read his scripts. What was my favourite part of this graphic novel was the very last section of the book. Gaiman told us he would allow us a peek behind the curtains of how he writes his graphic novels. Actually, I’m wrong in saying that. He explicitly told us that this was not the Neil Gaiman style of how to write graphic novels, but simply how he writes The Sandman.
I did not think that writing the script for a graphic novel would be so intense. It seems like it would take ages to finish a page (I’m sure it does). I know I breezed through the pages of the novel, spending 2-3 minutes max on them. But the effort it takes to write one of these pages is commendable. He included notes from both him and his artist, Kelley Jones, in the margins of the script.
Gaiman writes his script out in a manner similar to writing a letter. To introduce each page, he would write to Kelley how he wanted the page to go. Additionally, he would also add random thoughts that he happened to ponder on. One of these included how he had a strange phone call the night before and it freaked him out. I loved this. It personalized the script, and made it so much more inviting to Kelley (or at least I would think I would feel that way if I was him). You are no longer reading stone cold instructions, but something from a friend.
After taking Creative Writing 203, we were told that we were not supposed to give the artist too much directions in our children picture book drafts. I wrote my story (which I was not satisfied with– and neither was my TA judging from my mark), and the only instructions you could get from what I wanted the illustrator to do was which page I wanted the text on. It was important that you allowed the artist freedom. Gaiman’s approach was completely different..
If you could read how detailed he makes each scene, it really is amazing. He not only tells the artist roughly what he wants the character to be doing, but he goes as far as to say that outside the window, we should get a lighting that suggests “early summer or late spring”. Each page’s panels have about half a page of text instructing Kelley on what he should do. Gaiman also says that he’d send Kelley reference pics (which us as the reader does not get to see). Gaiman does say that he has to first know who his illustrator is before he writes his scripts, so I am assuming he keeps in mind what he believes Kelley can produce.
I think this is amazing, but of course, I am thinking through the mind of the author. I would love for my artist to paint exactly what I imagined in my head. I wonder how Kelley feels. I wonder if this is the approach many other comic book/graphic novel writers use when they write their scripts. Or maybe it’s because Neil Gaiman is a such a big shot, so he gets to do things this way. Or maybe it’s a neutral agreement between solely Gaiman and Kelley. It’s weird how I refer to Gaiman by his last name and Kelley by his first. But I like it like that.
Seeing the script, I no longer think of graphic novels as very short pieces with several hundred words. Sure, each chapter may come in a small little compact booklet, and yes, we may only see the few hundred words that the writer chose to express physically with words in font.
But it is so much more than that.
-Karen
Follow Karen K. Lee on WordPress.com